Muddy hell! PowerWash Simulator is better than I ever expected 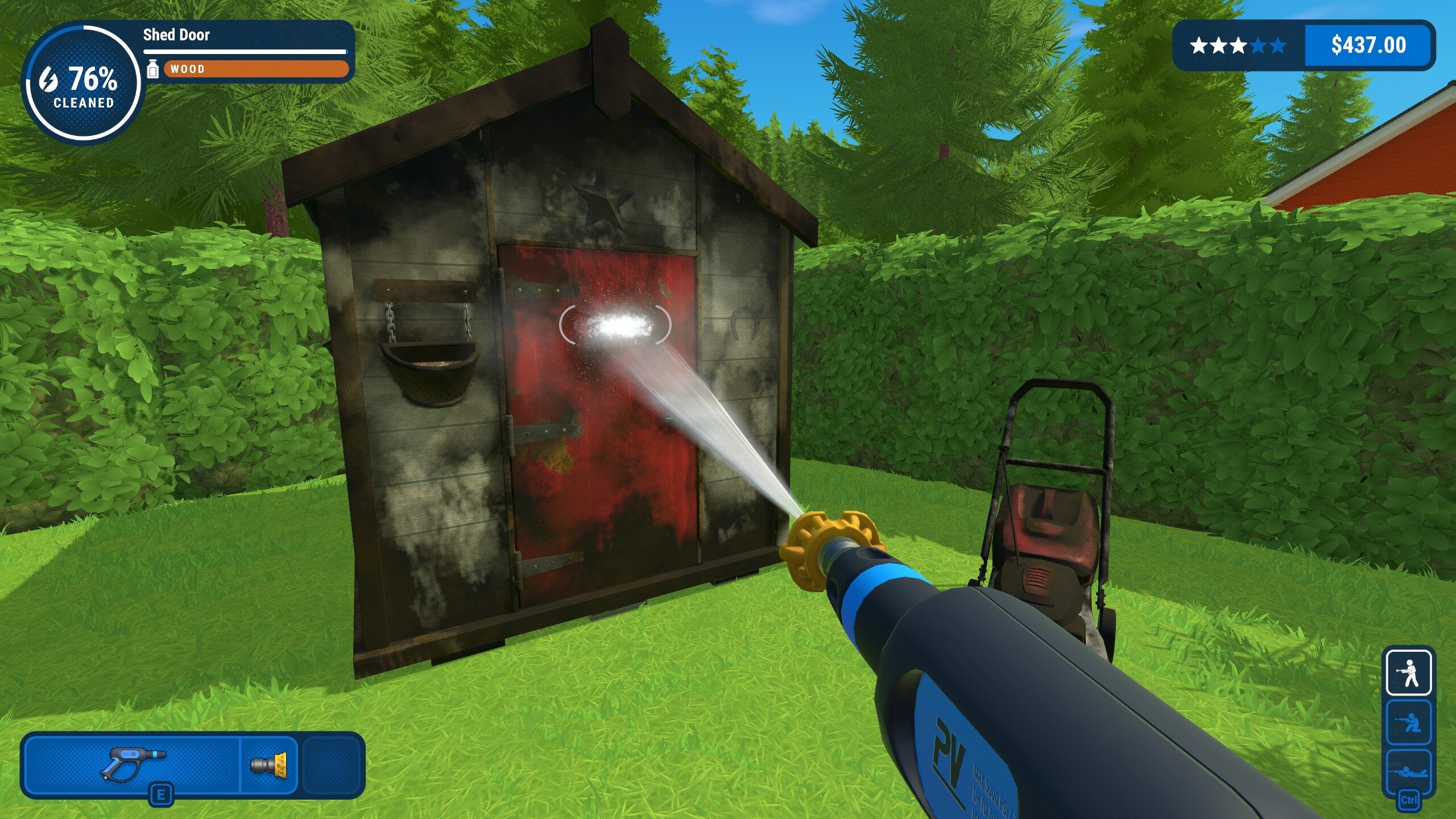 I once chased someone across a B&Q car park because of a power washer. It was when I worked there – I wouldnt chase someone now! Maybe if there was a sale… But no. I was standing by the tills when I saw someone leg it back through the entrance with a large power-washer box. Inspired by my macho colleague Russell – “Russ” – who had recently chased a shoplifter and tackled them into a hedge, I shot through the exit doors and across the car park after them.

The thing is, I hadnt really thought it through. I didnt know what Id do if I caught up with them – politely ask them to give it back? Im not sure I actually fancied diving into a hedge. To make matters worse, they were running towards a car with other people inside. What was I supposed to do about them?

But so intimidating must my visage have been – maybe I run like a charging rhino – that by the time I got near, they had dropped the power-washer, jumped in their getaway car and taken off, doing me a massive favour in the process. I returned to the store a hero – even Russ looked impressed.

Ah, power washers. You always remember the first time you use one – that kick-back you get from the pressured water as it slams into whatever youre pointing at, and that little “ooh” you give when you feel it. You clean a bike in minutes that used to take you an hour; you make a car look like new while envious neighbours watch on; you bring up a patio a treat. Im not surprised someone has made a game about them.

I am surprised, however, how popular the game is. PowerWash Simulator has more than 20,000 “overwhelmingly positive” reviews on Steam – the sort of number that usually indicates big success. And it hasnt been around that long – it just launched in 1.0 after just over a year in Early Access. It has also just added Xbox versions, and its included with GamePass.

To discover why its so popular, I fired it up – a perfect hot week for it, I think youll agree. And what was immediately apparent was how much more there was to it than I was expecting. Yes its about one fundamentally simple thing, blasting dirt off of objects, but its the variety of objects there are to clean, and the many ways in which you go about blasting dirt from them, that makes it stand out.

For instance, my first job is to clean a van thats absolutely caked in mud. Its so covered you cant read the signwork on it or even see the headlights. And it soon becomes apparent that the mud is not easy to shift and that theres a lot of van to clean – the two things acting like a multiplier for each other.

Youll soon learn you need to use a variety of nozzles – some with better coverage and others with more power – to get the job done, and that you have to approach the project from many angles: crouching, jumping and going prone in order to see all of the mud on the van – underneath it, on top of it, in the nooks and crannies of it. This game has the dirtiest things Ive ever seen.

“This is not a game about rushing towards an end…”

Its an introduction that realigns your expectations. It shows you that cleaning even a van in this game is going to take longer than you thought. And then you load up level-two and see an entire garden – patio, pond, shed, fencing, lawnmower, barbecue, etc. – and feel overwhelmed. But through steady, methodical work, you achieve it, and this is what is key to PowerWash Simulators charm.

Theres actually a bit about it in Edge magazine this month, the calming quality of it, and it turns out it was no accident. James Marsden, founder and CEO of the games developer, FuturLab, said the idea came from his business partner and wife, Kirsty Rigden, who was watching powerwashing videos to “self-soothe during a particularly stressful period at work and our personal lives as well”.

A prototype was then knocked up in a week, not for public consumption, but for the team to play at lunch to relax. “We had no real plans to release the demo,” Marsden said, “but one of our marketing coordinators at the time said, you know, itd be a public service to tive this out for free right now, because it was the start of lockdown, and people were very anxious.” So thats what FuturLab did.

Several clever touches stop the formula getting boring. Levels are broken down into many cleanable objects – a dog kennel is made up of several parts, for example – and every time you clean enough of one, you hear a “ding!” and it flashes blue to tell you its complete. Not only does this break big jobs up for you and encourage you to keep going, it also has fairly relaxed targets for you to hit before it triggers – it depends on the object and where it is – again, encouraging you along.

Theres also quite an enjoyable story layered on top in Career Mode. Youll receive text messages while you work about upcoming jobs or, often, the one youre on – one person was telling me how keen they were for their daughters to play in the cleaned garden, for instance – or about other things entirely, and they not only break the silence, they add a sense that theres a purpose behind what youre doing, which again, encourages you on. And the money you make, you plough back into equipment like better power washers, or soaps, or new nozzles – all fuelling you with a sense of progression.

The year in Early Access has clearly helped, too. The game feels robust and polished, and also broad in what it offers. Theres a Free-Play mode, theres co-op – which I can imagine being enormously useful – and there are time-limited and water-limited modes for upping the challenge, if you want it. And the imagination thats gone into some of the levels youll face is wonderful – theres a whole childrens play-park for you to clean.

Perhaps thats what those shoplifters at B&Q were on their way to do all those years ago: clean a park. Who knows? Maybe I stifled a business in the growing. Now, you see, I understand the appeal. PowerWash Simulator is a blast.

Here's how The Callisto Protocol took inspiration from SpongeBob SquarePants

Here's how The Callisto Protocol took inspiration from SpongeBob SquarePants

The art of getting jank right